"To the friends that dwell afar off" 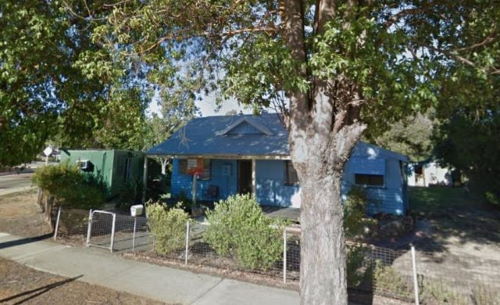 Until recently, the Armadale ‘shedders’ have occupied an old fibro house in Tudor Street, courtesy of the Metropolitan 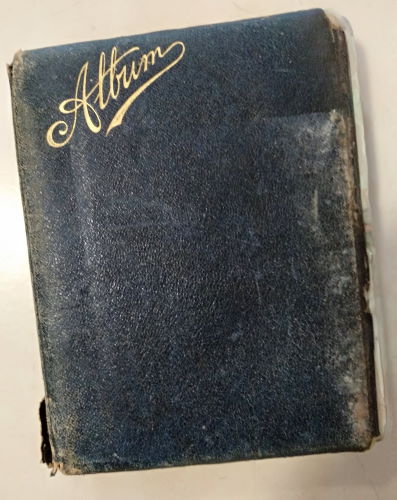 Redevelopment Authority. The group has worked hard to build its membership and develop wood and metalwork skills as well as giving a hand to the local community.

Unfortunately, the inevitable day arrived when the group was advised that they needed to move on and so began the task of sorting the contents of the ‘shed’ which had been accumulated over the years. FHWA member Lynne Roberts was one of those who volunteered to help.

In amongst an odd assortment of books stacked in a corner, she found a small, somewhat battered volume with a faded blue cover. On the flyleaf, handwritten in ink was the name Violet Ferguson and the date April 8th, 1893. The pages that followed were filled with handwritten verses, ditties and messages from a variety of young people that Violet encountered in the years 1893-1901 as she travelled the world. Many of these entries were accompanied by beautiful sketches.

Who was Violet and what was her autograph book doing in the Armadale Men’s Shed one hundred and twenty years on? 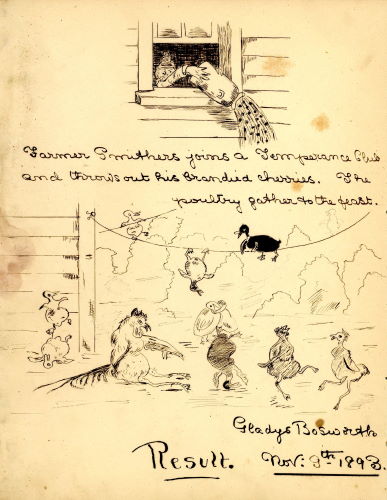 The story of this young woman and her family has proved to be as fascinating as her album. Lovers of adventure yarns and swashbuckling tales of intrepid men and women need look no further for inspiration than the Fergusons, one of Western Australia’s pioneer families.

Violet's paternal grandfather arrived in Western Australia in 1842 aboard the Trusty intending to farm at Australind but the failed scheme meant a return to his former calling - medical practitioner - and he went on to become the state’s first Colonial Surgeon. We can thank him for the establishment of a hospital in Perth, known today as the Royal Perth Hospital. The same Dr Ferguson also established a vineyard on a large tract of land on the Swan which he’d purchased from a Colonel Houghton. This vineyard still carries the name of the original landowner.

John Maxwell Ferguson, Violet’s father and the eldest son of Dr Ferguson and his wife Isabella, obviously inherited his father’s 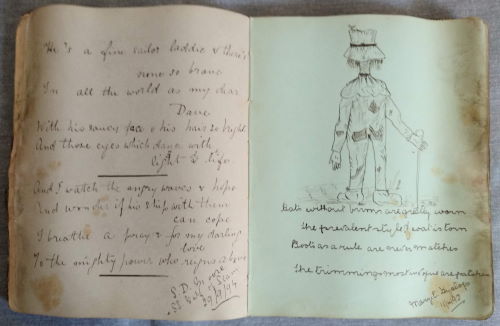 adventurous spirit. As a young boy, he was sent back to Scotland, the ancestral home of the Fergusons to be educated and later served for eleven years in the British Merchant Navy. Although he returned to Western Australia in his mid-twenties, the sea was now in his blood and after his marriage to Susan Finnerty, daughter of the Commandant of Troops, the couple returned to Scotland where he studied for his Master's ticket. There, Susan gave birth to their first two children, a daughter Maggie and a son.

In 1876, John Ferguson, now a Ship’s Master bought a newly constructed wooden schooner which he named Airlie. In late November, with nine crew and his pregnant wife plus his two young children and five female members of his extended family, he set sail for Western Australia. Ninety-nine days into the voyage, off Capetown, South Africa, Susan went into premature labour and gave birth to twins, Violet and her brother Charles. The babies were a month old when the schooner finally reached Fremantle on 4 April 1877.

By April 1893, when Violet wrote her name on the flyleaf of her new autograph book, the Ferguson family had undergone dramatic changes. Her siblings now numbered nine, including another set of twins born eighteen months after her own dramatic arrival. Her older sister Maggie had died after being invalided by an accident and her exhausted 38-year-old mother Susan had also passed away. Violet’s father went on to marry his Scottish cousin, Grace Fergusson who had given birth to two daughters by this union and was pregnant with a third. There was a further tragedy in that the schooner Airlie, on its way from Borneo to Fremantle with a cargo of coal caught fire and was destroyed. Violet’s father, who'd been one of the lessees of the Swan Brewery, was now heavily involved in the hardware and timber industry with mills at Cookernup, Yarloop and Wooroloo and large sawmills in Perth. 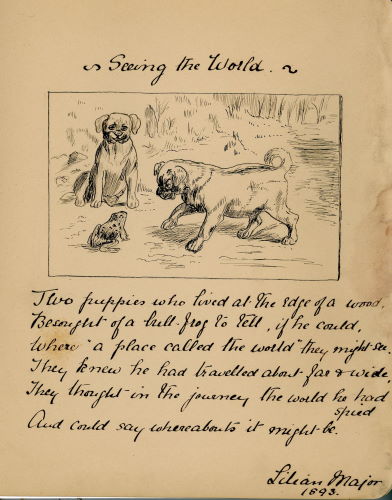 It was an appropriate time for Violet, now sixteen to get away and complete her education in Scotland. She left Fremantle in July 1893, her 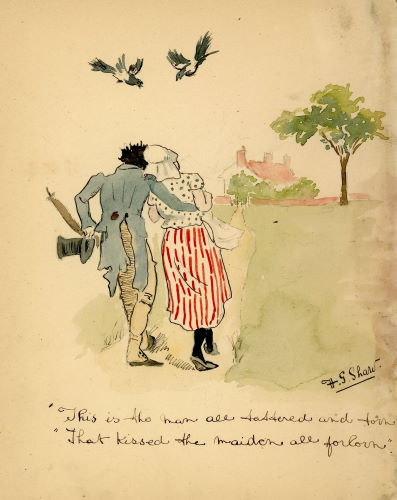 autograph book with blue cloth cover in her luggage. Over the next twelve months, well-educated and gifted young friends added their signatures and messages to its pages. Among the entries were verses from Wordsworth, Cowper, Swinburne; quotes from Victor Hugo and autographs from members of her stepmother’s family and descendants of other early West Australian settlers such as the Ommanneys.

Violet returned to Western Australia over a year later aboard the SS Gulf of Siam accompanied by members of the Moore family, whose father, WD Moore had been in business with her father and the Fry family, who went on to establish the properties Shendon and Crenfield at Benger and Donnybrook. All signed Violet’s autograph book.

With her stepmother now State President of the Women's Christian Temperance Union and her father standing for Parliament as well as being the principal advocate for the establishment of the Presbyterian schools, Scotch College and Presbyterian Ladies College, Violet helped run the Fremantle based Ferguson household and look after the younger children.

A visit to family in Scotland and Europe in 1900-1901 is evidenced by further entries in Violet’s album and then it appears to have been consigned to a shelf or drawer. 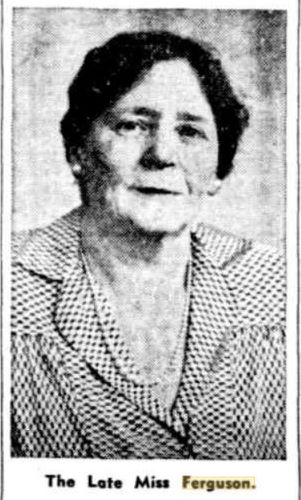 In the early years of the 20th century, Violet or “Dolly” as she was then widely known joined the staff of Western Mail and the West Australian. She went on to become the editor of the social pages of Perth’s major newspapers and her pseudonym was “Airlie’, the name of the boat on which she had been born.

Dolly made a final trip to Europe in 1937. Before she left and on her return, members of the Karrakatta Club honoured her at a luncheon. The surnames of the women attending read like a ‘Who’s Who’ of Perth establishment – Shenton, Forrest, Clifton, Sandover, Pitt-Morison, Leake, Clifton.

When she died suddenly in 1942 at the age of sixty-five, obituaries stated that ‘among women journalists, she was one of the pioneers” and “her duties as a social writer brought her in contact with some thousands of her sex to whose respect and esteem she won in an ever-widening way.”

In describing Violet, the person, friends observed that ‘behind her gentle and unassuming manner was hidden a rare character of outstanding strength, loyalty and unselfishness which was entirely lacking in pettiness and cheap criticism… Her deep but quiet sense of humour carried her bravely through all the vicissitudes of life’

Three months after her unexpected death, Violet’s twin brother Charles also passed away. Both are buried in the Ferguson family plot at Karrakatta Cemetery where their father, mother, stepmother and various members of the large Ferguson clan are interred.

How Violet’s autograph book ended up in the Armadale Men’s Shed will probably remain a mystery but, as a record of 19th-century social networking, it’s a fascinating example and will hopefully find a home in a local museum or archive. 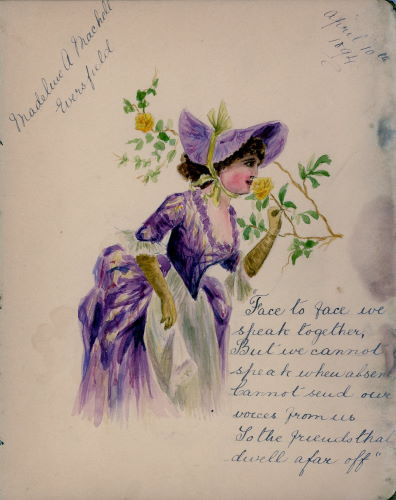 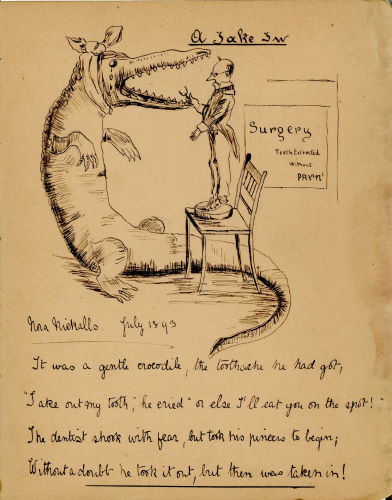