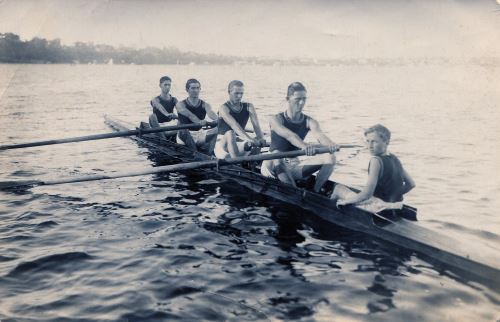 This was how Western Mail described May Day in 1920, the day my Uncle John stroked the Scotch College crew to victory and set a course to make a name for himself in the waters around Perth.

I thought it ironic that John was born, six months after Federation, in the small town of Wiluna on the edge of the Western Desert where his parents ran a successful general store catering for prospectors who flocked to the area in search of gold. The Swan River and Indian Ocean were beyond his comprehension until his parents sold their business in 1913 and moved to the Perth suburb of Cottesloe.

Buoyed by victory in the Head of the River, John became a member of the West Australian Rowing Club and his strength, work ethic and calm demeanour drew the attention of the selectors and he was included in the Western Australian team to contest the Kings Cup in Launceston, Tasmania on Anzac Day, 1921.

Dame Fortune again smiled on him and his fellow crew members. In ideal conditions on the Tamar River, the Western Australian boys gained their first victory in this classic event

after fifteen attempts spread over some twenty years.

“After a most magnificent contest, victory fell to the lightest of the bunch, West Australia… [the crew] rowed with a vim and sparkle which was nothing short of magnificent, and they thoroughly deserved their win.…… There was wild excitement as they swept down on the line and a breathless hush until the black and gold flag was run up” (Kalgoorlie Miner 1921 April 26)

John was to represent Western Australia again in the 1922 Kings Cup race held in New South Wales and in 1923 in his hometown of Perth but the WA boys were sadly unable to repeat their success of 1921.

Around this time, John’s interest in surf lifesaving appeared to overtake his enthusiasm for rowing. Notwithstanding, he was selected in an eight-man crew chosen to represent the WA Rowing Association in a test race to be held in Adelaide in February 1924. The winner would represent Australia at the Olympic Games in Paris in May of that year.
The WA challengers lost to the South Australian Murray Bridge crew but,

‘only after one of the most stirring battles that has ever taken place on the water did Murray Bridge win the verdict by three feet’. (West Australian 1925 January 31) 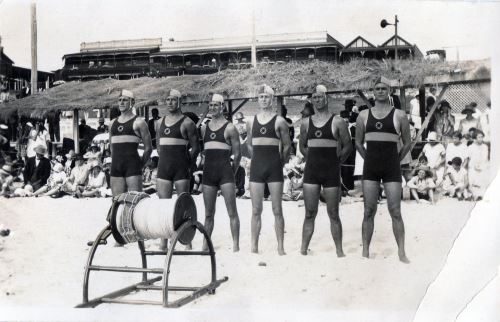 Throughout the twenties, John alternated his time between the river and the ocean. On weekends, he could be found either rowing for his Club, competing (and often being placed) in the many ‘Swim Throughs’ conducted by the West Australian Amateur Swimming Association or on the beach organising activities as Captain of the Cottesloe Surf Life Saving Club. Eventually, however, his involvement with surf lifesaving became all-consuming. In 1926 he was Western Australia’s champion beltman and a member of the State Champion R&R team.

Sadly it was a gruesome event which occurred on the last Sunday of November 1925 which again highlighted John's ability and dedication to his Club and the public. For days on end, local newspapers outdid themselves with graphic and lurid descriptions of what happened.

KILLED BY A SHARK.

With dramatic suddenness, amid a happy crowd of bathers at Cottesloe yesterday afternoon, a ghastly tragedy took place, when a large shark swam in amongst those in the water and attacked and killed one of the bathers. The victim was an elderly man, whose age is estimated to be about 55 years, named Simeon Ettelson. His occupation was that of a bookmaker's clerk and, for the last five years, he had been residing at the Hotel Metropole, Perth. So far as is known, he had no relatives in this State. The tragedy occurred at about 3.15 o'clock. The heat of the day and the prospect of a cooling bath drew a very large number of visitors to Cottesloe and the water was crowded with people. Suddenly a cry of "Shark!" was raised and immediately bathers rushed for the shore. Just before the cry was given, some members of the Cottesloe Life Saving Club had been in the act of pushing down the beach a dinghy in which they intended to row about the coast. Almost as soon as the cry was raised it was seen that the shark had attacked one of the swimmers and the dinghy was rushed into the water. Five members of the club climbed into the little boat and, in their haste, not waiting for row locks, paddled across the 60 odd feet to where a man could be seen floating face downwards in the water, which, by this time, had turned to a dull crimson colour. The speed of those in the dinghy was remarkable, not three minutes elapsing from the time when the boat was run down the beach to when it reached the injured man. Had the dinghy not been available the injured man would undoubtedly have disappeared. While the boat was making its way to the man, three other members of the club made an heroic attempt to rescue him. As soon as the attack was made, they dashed into the water and commenced to swim to the man, regardless of the danger of being bitten by the monster, which could still be seen swimming about. Their attempt at rescue was sufficient to draw the shark's attention from its victim and the boat drew up to him. One of the three rescuers clambered into the dinghy and the two others turned towards shore. Before reaching safety one of them had a very narrow escape, the shark being only a few feet away from him when the bow of the oncoming dinghy apparently frightened it. The monster then turned to the injured man, who was being dragged into the boat and again attacked him, inflicting another wound. Those in the dinghy were using the oars in an endeavour to beat off the shark and for a few seconds were successful. Then the shark, in a last endeavour to get at his victim, swam with tremendous force against the little boat, almost capsizing it.
At times the fearsome body of the great fish could be seen almost entirely out of the water and its tail, as it lashed out fiercely, inflicted slight injuries to the legs of members of the club who were in the boat. The whole incident from the time the boat was launched until it was at last safely hauled up on the beach, probably did not last ten minutes but the short period seemed to be age-long to the watchers on the beach. During the time the rescue was being made, several women became hysterical and horror could be seen written on nearly every face.
When the body was brought to shore, it was immediately taken to the casualty room of the LifeSaving Club, where Dr. Harpur, of the Fremantle Hospital, who was on the 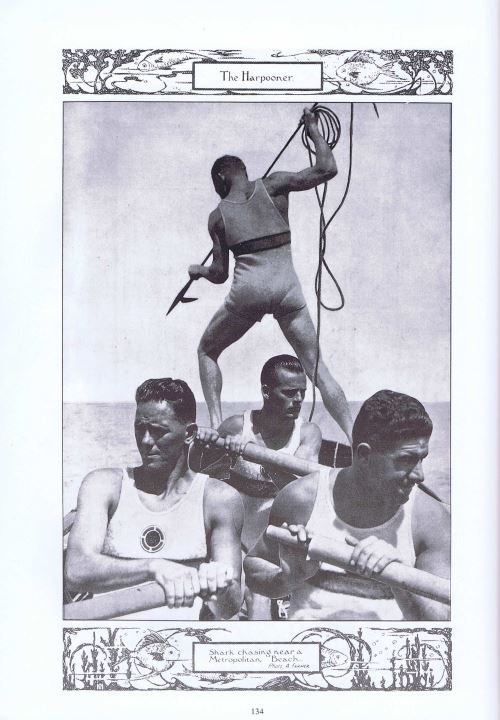 beach, pronounced life to be extinct. The injuries of the victim were terrible. One of his legs was rendered practically bare of flesh from the knee to the hip and, a little higher than the hip, was another and smaller wound. It was stated that the monster made three bites at his victim, who was about 20 yards from shore when first attacked. When in the dinghy, the injured man was stated to have exclaimed, "Oh, my God!" These were the last words he spoke. From the casualty room, the body was removed to the Perth morgue. For the remainder of the afternoon, people were prevented from entering the water by Life Saving Club members, and they crowded to the water's edge to watch the attempts which were commenced to catch the man-eater. Two shark lines, heavily baited, were thrown out, but though the shark could be plainly seen swimming around in the vicinity of the lines, it did not appear to touch the bait. At times it came within about 20 feet of the shore, and, on these occasions, efforts were made to shoot it with two large-bore rifles. On one occasion it appeared as if the shark had been hit, for it lashed round in the water for some seconds before it swam away. Although only one shark could be seen at any one time, it was practically certain that there was more than one of the monsters in the vicinity of the beach. Old residents in the district stated that it was only on occasions when a prevailing easterly wind made the water very calm and when the weather was very hot, that sharks came in close to the beach at Cottesloe. On other days, when the sea breeze caused a lot of surf, the fish were too frightened to come close. Later in the afternoon, attempts were made to kill the shark by using dynamite. Charges were placed in the water and, when the shark was thought to be immediately above the charge, it was exploded. It was thought last night that this method had been the cause of injury to several sharks, but it could not be stated whether or not the man-eater had been killed. In the evening, the pilot tender Lady Forrest left Fremantle for Cottesloe in order to attempt to catch the shark. It was estimated that the great fish which could be seen from the beach was over 12 feet in length. (West Australian 1925 November 23, p8)

What made the exploits of the lifesavers so extraordinary was that the Club had no surf boat. The courageous men set off to rescue the unfortunate man in an 8ft dinghy and their efforts later prompted Perth businessman Frank Boan to donate Western Australia’s first surf boat to the Cottesloe Club. It was the latest in design then but incredibly cumbersome when compared with the sleek racing boats of today.

Nevertheless, the Club’s new acquisition featured in an impressive full-page photograph title “The Harpooner” published in the 1928 Christmas Edition of The Western Mail as did John, seated at the forefront of the boat.

By the time war was declared in 1939, John had been, at any one time, Cottesloe’s President, Captain, Coach, Life Member and Club Champion as well as a State Champion and for almost a decade, a Surf Lifesaving examiner and judge.

Military service and the march of time finally ended John’s involvement with the water. A small business in the port city of Fremantle later occupied most of his days and a hereditary heart condition curtailed his sporting activities.

I knew this quiet, gentle man in his later years. It was distressing to watch someone who had given so much of himself and his time to ensure the safety of Perth beachgoers become a shadow of his former self. His big heart stopped suddenly a few days before Christmas 1957.

"Nice? It's the only thing," said the Water Rat solemnly as he leant forward for his stroke. "Believe me, my young friend, there is nothing—absolute nothing—half so much worth doing as simply messing about in boats. Simply messing," he went on dreamily: "messing—about—in—boats;
Kenneth Grahame - The Wind in the Willows.