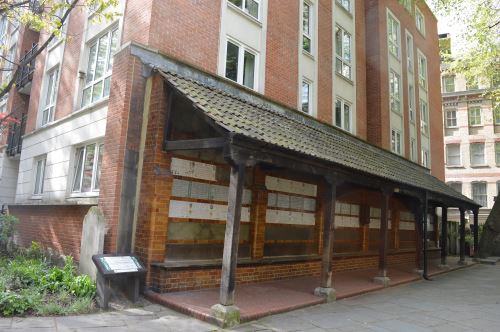 On a recent visit, she came across a park in central London, just a little north of St Paul’s Cathedral and sent me some photos, guessing that I’d be interested in her discovery. Thanks as 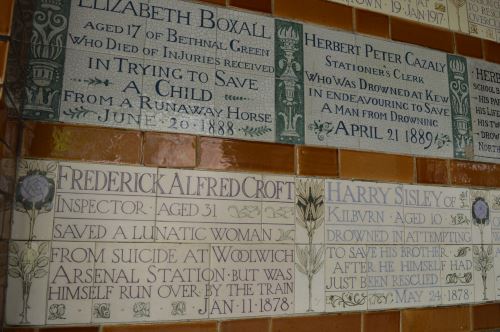 always to Wikipedia, I discovered that the park has a fascinating background. Fashioned from the burial grounds of Christchurch Greyfriars, St Botolph’s, Aldersgate and St Leonard’s Foster Lane, gravestones were used from these cemeteries to line the new park’s boundaries. It derived the name Postman's Park because the grounds became very popular with workers from the bordering GPO building in the early years of the 20th century.

The Wikipedia article is comprehensive (Google ‘Postman’s Park’) and if you’ve been struggling to find where some of your London relatives were buried pre1851, it may give you some clues.

The photos Robin sent me were of an unusual feature in the Park, The Memorial to Heroic Self Sacrifice, a public monument which commemorates the sacrifice of ordinary people who died saving the lives of others. The memorial came about as a result of a proposal made by George Watts in 1887 for a scheme to commemorate the Golden Jubilee of Queen Victoria. His idea was to "collect a complete record of the stories of heroism in everyday life" and to illustrate, he cited the case of Alice Ayres. Alice was a servant who, trapped in a burning house, gave up the chance to jump to safety, instead first throwing a mattress out of the window to cushion the fall, before running back into the house three times to fetch her employer's children and throwing them out of a window onto the mattress to safety before herself being overcome by fumes and falling out of the window to her death. 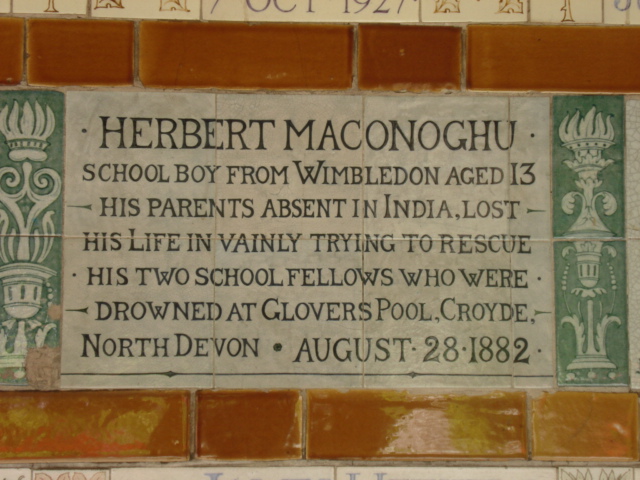 The scheme was partially adopted and in 1900, Postman’s Park became the location of the memorial. It was constructed in the form of an open gallery with a long wall housing ceramic memorial tablets, some of which were manufactured by Royal Doulton. There are fifty-four of these individually crafted plaques, the last being added in 2007. Photos of each tablet and details of the individual acts of bravery and the persons commemorated can again be found on Wikipedia.  Click here to be taken to the article

There’s always a chance that someone in the family tree and their courageous act could be featured on this Memorial. If not, it’s still a fascinating discovery in a busy metropolis and its evolution is another of London’s many interesting stories. Thanks for the heads up Robin!