The voyage of a lifetime

Following on from our previous article on the passenger list for the TSS Belgic.

The story of the Belgic 1911 voyage gives an intersting insight to just one voyage for immigrants to Fremantle, Adelaide and Sydney.

According to the passenger list in WAGS possession, the Belgic carried a total of 1,548 passengers - 925 to disembark at Fremantle, 252 for Adelaide, 203 for Melbourne, and 168 for Sydney.

Newspaper reports of the day have slightly different numbers of passengers.

The West Australian of Friday November 10, 1911, reports that there were 283 men, 332 women and 290 children (905 total) disembarking at Fremantle. According to the newspaper report this comprised 188 families totalling 697 people, and 208 single persons, and included 8 assisted immigrants (one family of 6 and 2 domestics).

The Kalgoorlie Miner asserts that the Belgic brought 1551 immigrants altogether, with 913 for Western Australia.

The Chronicle (Adelaide) of November 4, 1911 has 247 passengers for Adelaide, and the same newspaper dated 18 November quotes the Western Australian newspaper stating a total of 1,554 passengers, being Western Australia 917, about 230 being for South Australia, a similar number for Victoria, and 100 for New South Wales.

The Passenger list transcriptions from the ships manifest, undertaken by WAGS members some years ago and available in the Members Only Area of the WAGS web site, shows a total of 900 passengers who were due to (or did) disembark at Fremantle.

The discrepancies between the numbers that disembarked in Fremantle, versus those shown on the original passenger list provided by the vessel to the passengers on board, the newspaper reports and that of the WAGS transcription could be due to several reasons: some passenges did not actually board the vessel; some passengers disembarked at a port enroute to Fremantle (Cape Town) and did not rejoin the vessel; several passengers or families deciding to disemabark at another Australian port (Adelaide, Melbourne or Sydney); transcription error/s, perhaps a page missed in transcription, or a missing page on the official passenger list (unlikely); a combination of some or all of the above, or for some other unknown reason/s.

Whatever the reasons for the discrepancies, for Fremantle we have; 925 on the list given to the passengers on board the ship; 900 in the ships passenger manifest transcription by WAGS members; 905 in the West Australian newspaper; and a variety of other numbers reported in other newspapers. The number of passengers that actually disembarked at Fremantle, or the other posts is yet to be proven.

The voyage was not without drama.

Whilst there is no mention in Australian newspapers of the day that the ship called in at Teneriffe, it was normal practice for vessels to call at the port for additional coal. From all accounts the vessel had smooth sailing up until she reached Cape Town.

Potential fire in the hold

While in Cape Town loading additional fuel coal, it became evident to the Captain that there was a problem with the coal heating up in one of the bunker holds.

According to a report in The Mercury of 28 November 1911 (Hobart, Tasmania reporting on the South African press) passengers were not told of the danger; the suspect coal was discharged and a new load of coal was taken on board at Cape Town before departing for Fremantle.

"... Late at night a pungent smell was noticable, and the captain, chief engineer, and a representative of the coaling company at once proceed to make investigations, and discovered that one of the bunkers, which had been filled at Liverpool with north country coal, was in an advanced state of spontaneous combustion. The fact was kept quiet, so as not to alarm the passengers, of whom there were over 1,300 on board, but steps were immediately taken to deal with the outbreak, and by 7 o'clock next morning the work of discharging the coal was began in earnest, and proceeded with all expedition."

Having narrowly escaped a potentially catastrophic fire on board (quite unbeknown to the passengers) they now sailed into rough weather in the Indian Ocean.

Vessels can track quite a southerly course between Cape Town and Fremantle, which brings them into sometimes very cold and windy weather, snow can be common, as are storms with rough and high seas.

The Belgic encountered rough weather, and whilst passengers are routinely restricted below decks, and at times to the cabins as a matter of precaution during stormy weather, the ships crew go about their daily business.

The West Australian of Friday 10 November 1911 gives us an insight to what happened in one of the blows:

"... On the night of October 26, during a particularly violent blow, and able seaman fell over the side. The vessel was rolling heavily at the time, and the watch had just been relieved when the man disappeared. A number of life buoys, and what is known as a Holmes light, were immediately thrown overboard. Captain Thornton had a very anxious time in manoeuvering the huge vessel in the heavy sea; but fortunately the Belgic suffered little harm in the operation. Lifeboats were got ready for lowering, and the vessel steamed back around the holmes light. Nothing, however, was seen or heard of the unfortunate man, although one of the lifebuoys was observed floating in the water. The man was dressed in oilskins at the time, and, thus heavily weighted, his chances of ever reaching one of the lifebuoys in the heavy sea was very remote. After steaming about for some time the Belgic continued her voyage, the incident casting quite some gloom over the ship..."

Deaths of children at sea 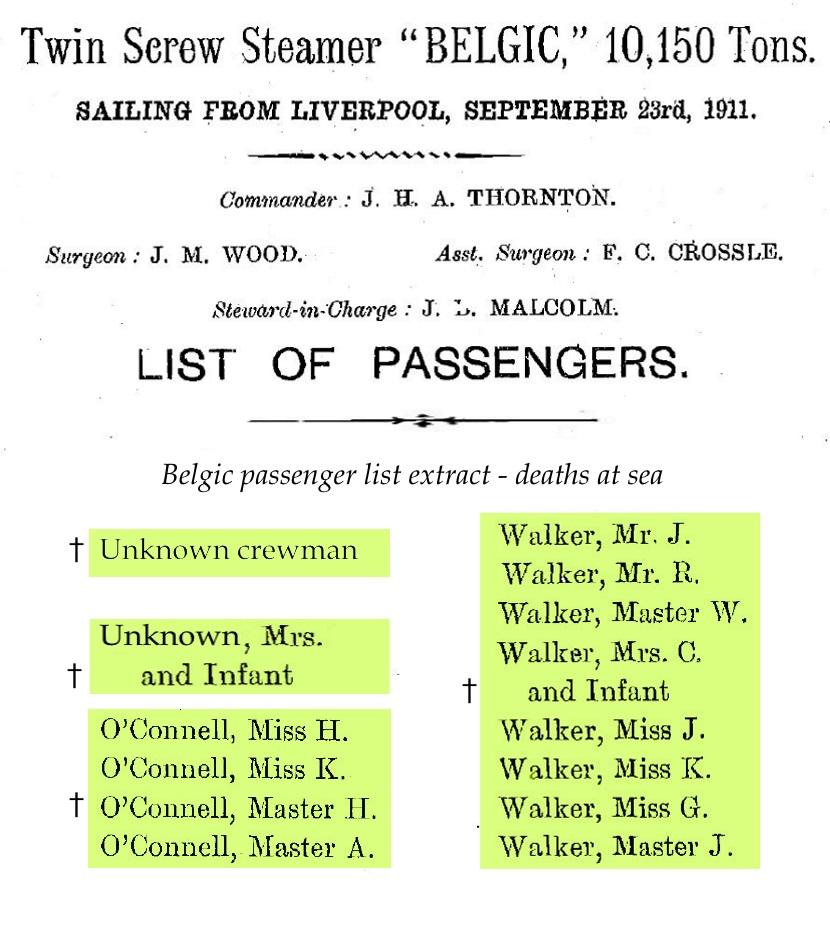 If the loss of a seaman overboard was not enough for the passengers to endure, there were three other deaths on the ship on the trip between Cape Town and Fremantle, all of them children.

Two of the deaths were infants who died of malnutrition.

The first death was of a child born on board the ship enroute; we do not know his or her name. The loss would have been a severe blow to the mother and family on board, as well as being keenly felt by all of the passengers on board along with the loss of a man overboard

The second infant death was Maxwell Walker. He was travelling with his family all the way from Scotland, listed as Fremantle passengers and apparently going to join their father in Perth. The father is not on the original donated passenger list held in the WAGS Library, and he does not appear on the transcribed passenger lists in the Members Only Area (members login here) of the WAGS website.

We can but image the grief that this family went through.

The third death was that of a 10 year old boy, Hugh O'Connell.

Hugh's mother Helen was a 36yr old nurse, in the company of her 3 children, Hugh (10), Katherine 8, and Alfred 4. Again, the father does not appear on either of the passenger lists, so we assume that this British family were also enroute to be re-united with their husband and father on the wharf at Fremantle.

Not the joyous occassion it should have been for the families mentioned here.

For the other passengers there was no doubt a raft of emotions and outcomes; a new start in a new country; family reunions; employment; marriage; complaints about the voyage, the ship accommodation and food; a fight or two on the wharf; desertion by 30 crew members resulting in time in gaol; but that's whole other story...