There was standing room only at the recent State Memorial Service for Professor Geoffrey Bolton AO.

His family, friends and colleagues, as well as representatives of our state spoke eloquently of the man and his pivotal role in telling the story of Western Australia and its place in the wider narrative of our country.

I served on a small committee with Geoff for a number of years and knew him not only as an interpreter of historical records, but as one who was passionate about their acquisition and conservation. He would always lend his expertise and influence in the community to ensure the survival of such materials, irrespective of their provenance. He recognised that the voice of every man and women in society was important. We all have much to thank Geoffrey Bolton for.

One of his former students recollected that Geoff constantly urged those attending his lectures to ‘first of all, recall and record your own history’. Sage advice indeed.

We tend to think of our own lives as having been uneventful and mundane and the telling of our stories, a somewhat pretentious undertaking. Yet I’ve discovered that my grandchildren have been engrossed by the small glimpses I’ve given them of my childhood. How my brother and I, armed with a bucket and spade would follow the baker’s cart up the street hoping to collect the horse’s fresh manure for the garden. The excitement of having chicken for Christmas lunch but how that was always tempered by the memories of seeing our greatly anticipated meal run headless around the backyard………..

How many times have I heard fellow genealogists say, their voices tinged with sadness and frustration 'I wish mum/nanna/aunty had told me about'……. or ……….'I wish I had thought to ask Uncle, dad/grandpa about' ………… and yet are we condemning our children, our grandchildren, our family members to voice the same regrets in years to come? Books and articles abound with tips about researching and writing the stories of our ancestors but maybe we need to acquire and establish the art of memoir writing first.

I know Geoff derived a great deal of pleasure from writing Daphne Street, the story of the community in North Perth in which he grew up. His A fine country to starve in which tells the story of the Great Depression in Western Australia was derived from the experiences of the adults in his life and community around him. I’m equally sure that those of us who make a start on our own stories will not only derive a great deal of pleasure from writing a memoir of our times but will create an ongoing gift for our children and descendants.

Browsing in the WAGS Library the other day, I came across a review in the Sept-Oct 2015 issue of Inside History. It caught my eye because the book reviewed was written by the fine Australian author Kate Grenville, whose previous work The secret river was recently dramatized by the ABC. The review is reproduced here in full with kind permission of Cassie Mercer, editor of Inside History 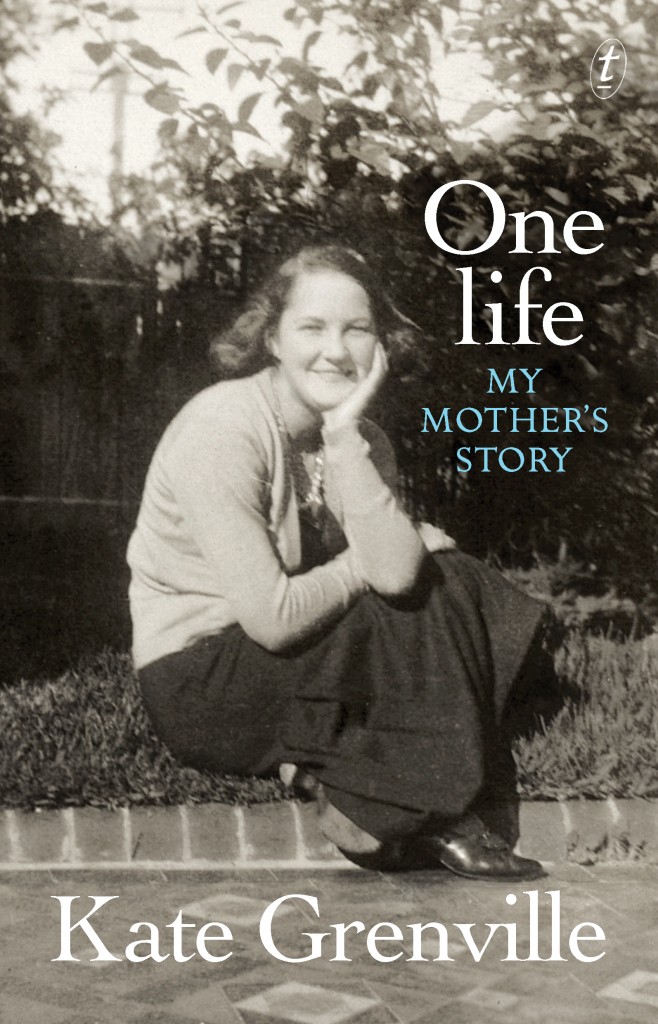 One life: My mother’s story by Kate Grenville. (Text Publishing 2015)

A few years after her mother died, Kate Grenville got out the papers she had left and found a number of exercise books with stories of her forbears, her childhood and adulthood. But, she writes, ‘my mother’s many hopeful starts all petered out after a few pages. What she left was a mass of fragments’

With the consummate skill she uses in her fiction, combined with a deep desire to retrieve the life of the mother she loved deeply, Grenville brings the reader to the story of Nance Russell; daughter, pharmacist, wife, mother, mature-age student, traveller and grandmother. She puts aside her own voice to tell Nance’s story from her birth in 1912 to Dolly and Bert Russell, farmers, grocery shop and later hotel owners, until she learns that she is to have a third baby – ‘one last child’ - Kate.

Grenville has taken her mother’s fragments and pieced them together to tell a story and fill a gap in the history of Australia , bringing the reader an important account of a woman who lived during ‘two world wars, an economic depression and a series of social revolutions [that] had changed the lives of hundreds of millions all over the world’. One life provides a loving appreciation of a woman of her time who paved the way for the women of now.

Although Kate Grenville had no other option but to write her mother’s story from incomplete fragments written in old exercise books she at least had the skills to meld them together and create a story. Our families may not have members with such skills.

We have lived through enormous sociological, political and technological change and our stories will I’m sure be appreciated by future generations of our families.

I for one will take Geoff Bolton's advice on board - ‘first of all, recall and record your own history’ and hopefully make a reasonable fist of it.