There’s no doubt, photos are fascinating!

We can be drawn to an image because of its technical excellence or the way it’s been composed. There may be a fascination with the subject or an intrigue as to the context or identity of the photographer. Then too, the provenance of a particular copy of a photograph may be the primary interest because of the story it reveals.

Some fourteen years ago, I found myself drawn to a particular photograph in the pictorial collection of the Battye Library. Recently though, my interest in it has widened considerably. Let me explain….

In 2001, a reorganisation of the shelves in the Battye Library’s Private Archives stack was necessary. During the process of moving and relocating items, a flat box containing about eight large format photographs was discovered. The photographs appeared to be unrelated and there was no accompanying documentation. None of the items had been processed or catalogued.

I was particularly interested in one of the images, a gelatin silver print mounted on thick card; its dimensions were, from memory, about 15 x 12 inches. It had the neat caption ‘Anzac Cove, May 1915’  at the base of the image and an inscription in the right hand corner in the same hand which read ‘Capt. R Henderson Smith from Lieut H D Mosely 29/7/1919’ 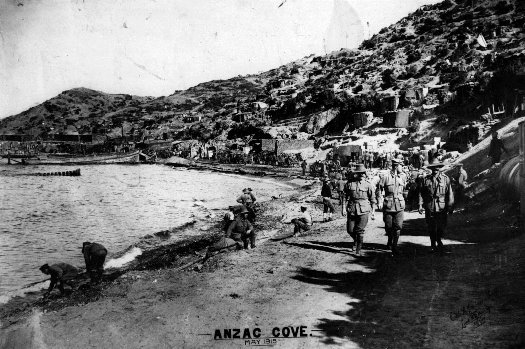 I’d visited Anzac Cove some seven years earlier at a time when Turkey and Gallipoli were not popular tourist destinations for Australians and my emotional reaction during that visit caught me completely by surprise; those memories resurfaced when I saw the newly discovered photo.

The photograph was clearly not the work of an amateur photographer and I contacted the Australian War Memorial to ask if their curators recognised the image and if they did, what copyright issues if any, existed. I was advised that to the best of their knowledge, it was not an Australian or British official war photograph. 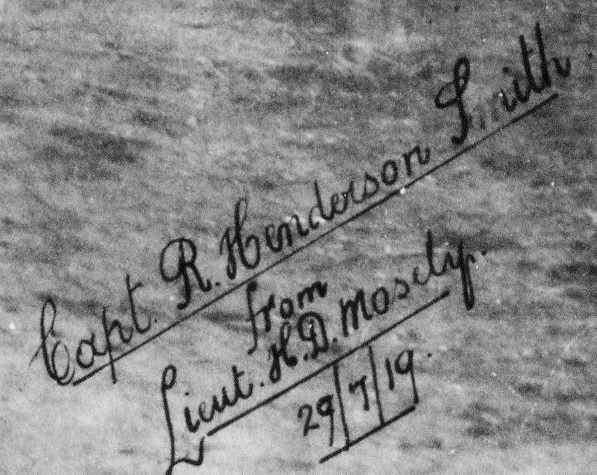 All Internet resources available at the time were checked, but in 2001, they were few.

The digitisation of Australian newspapers was merely a dream and only limited records of material held by the Australian War Memorial and National Archives were available online. Every attempt was made to discover more about the photograph and its origins, without success.

After deliberation, it was decided to send the original item to the Australian War Memorial and prior to its despatch, the photograph was scanned and a copy negative made. It was accessioned as 10056B.

Some thirteen years later, now retired, I became involved in a project sponsored by the West Australian Genealogical Society to name the men in the iconic photograph of the 11th Battalion on the Great Pyramid of Egypt (Cheops) taken in January 1915.

Part of my involvement was researching the stories of the men in the original 11th Battalion, one being 2nd Lieutenant George Holt Henderson Smith. The surname ‘Henderson Smith’ was familiar and eventually I remembered that it was one of the names inscribed on the Anzac Cove photograph. The initials and rank though were different. In addition, George had been killed at Gallipoli in May 1915 and therefore could not have been the recipient of the photo in July 1919. No mention of an R Henderson Smith or an H D Mosely could be found in AIF records and I came to the conclusion that Captain Henderson Smith and Lieutenant Mosely were British officers.

Several months later, when delving deeper into the background of George Holt Henderson Smith,  I came across a newspaper article on the Trove website. It revealed that in 1914, George’s father, Robert Henderson Smith was instrumental in forming the Cottesloe Rifle Club, then a reserve forces unit, and had been appointed its Platoon Commander with the rank of Captain. In addition, one of the junior corporals was an ND Moseley. Was it possible that Captain R Henderson Smith, the recipient of the photograph was the father of George Henderson Smith (killed at Gallipoli in May 1915) and could the surname of the donor, Mosely (as inscribed on the photo) be misspelled?

Further investigation revealed that the initials of Moseley, (the Junior Corporal mentioned in the newspaper article) were not ND but HD. Harry Doyle Moseley had joined the AIF in 1916 and returned to Australia in 1919, disembarking at Fremantle on 24th July. Prior to his return to Australia, he had been seconded to Australia House to work in its Publications Section.

It wasn't difficult to conclude that while working at Australia House, Harry Moseley had discovered the photo of Anzac Cove, obtained a copy and brought it home with him. Five days after his arrival, he organized for it to be mounted and inscribed, (someone else must have done this as Moseley would never have misspelt his own surname) and presented it to his former platoon commander, Robert Henderson Smith. 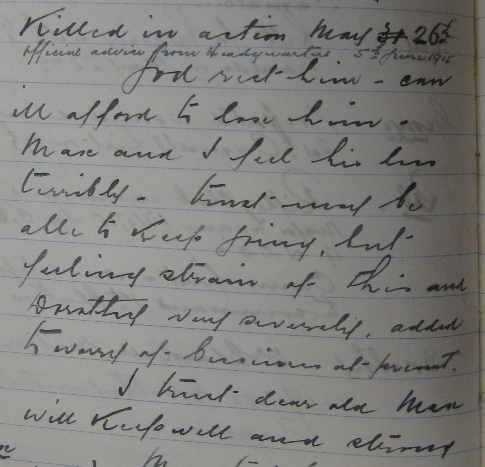 The story however was not yet complete. A search of the State Library’s catalogue revealed that Battye Library now held a collection of the papers of a Robert Henderson Smith (5781A). These were not processed and catalogued until 2002, a year after the Anzac Cove photograph had been discovered although they’d been received in April 1985 just prior to the opening of the new Alexander Library Building.

I remember 1985 very clearly. Large numbers of contract staff were hired to help with the enormous task of packing up the Library’s materials ready for transfer to the new building. I suspect that the Anzac Cove photograph was also received in April 1985 as part of the Henderson Smith collection but because of its format, was separated from the bulk of the collection and in the hurly burly of relocating the State Library’s massive collection, the documentation linking the photograph to the Henderson Smith collection was mislaid or not completed.

I’m still left with a quandary about the subject matter of the photograph. Did Moseley choose the image because it was taken in

May 1915 when George Henderson Smith was killed or did he recognize George in the photo? There is certainly a likeness between George, whom Moseley would have known well, and the central figure of the group of three walking towards the camera. Only Robert Henderson Smith and Harry Moseley know the answer to that question.

There is so much more to the story of Robert and George Henderson Smith. Dr Peter Stanley in his book Digger Smith and  Australia’s Great War: ordinary name – extraordinary stories tells of the tragedies which decimated this family. In addition, the results of my research into the story of George Henderson Smith can be found on the 11th Battalion website (http://bit.ly/1TZThmp )

My story of the Anzac Cove photograph is only that……. my story.

Nevertheless, I believe it warrants being noted by both the Battye Library and the Australian War Memorial (who hold the original photograph and letters from George Henderson Smith). The story provides clues as to who might have taken this excellent photograph over one hundred years ago. In addition, this inscribed, mounted print demonstrates the esteem in which Robert and George Henderson Smith were held by those who knew them well.

This was not the last to be heard of Henry (Harry) Doyle Moseley. He rose through the Western Australian public service ranks and headed the Royal Commission into the condition and treatment of Aborigines – the 1935 Moseley Royal Commission. The reporter covering the Commission was a young Paul Hasluck (later Sir Paul), the distinguished Australian statesman who was also the first President of the Friends of the Battye Library.

Thank you Jennie Carter for this additional piece of information.