Are they relevant to my research 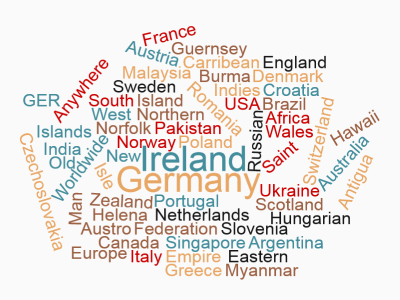 An interesting discussion took place a while ago on the WAGSNet mailing list (closed list for members only) about who uses the WAGS facilities and the areas that members are interested in researching their family history.

So, it begs the wider question (or statement) that members often get from the general public:- Why should I join the local genealogy society - when all they do is local research, and I am interested in overseas research?

Well folks, that is the biggest misconception there is about joining any family history or genealogy society. Local Family History Societies only do worldwide research.... they just live in your community.

Since 1788, everyone of us who is not aboriginal Australian, and indeed a growing number of our original inhabitants of the country, has some connection with an overseas country. The vast majority of our ancestors either arrived by boat or by aircraft.

No matter how your family arrived, if you are living in or researching in Western Australia, or have connections elsewhere in Australia, researching your ancestors will involve at least some, and generally a significant amount of overseas research, more so the further back in time you go.

To help dispel the myth that WAGS only focus on local research, and as a matter of interest to members and non-members alike, we have had a look at the research interests of our existing members, specifically those who utilise the WAGS Members' Interests facility on our website (which may have a bias due to the limited number of entries compared to the overall population), the following statistics emerged:

Entries in the WAGS Members' Research Interests (MI's) table on the WAGS website, as at October 23, 2012:

The next 10 make up another 150 entries, they are: USA, India, Worldwide, Canada, Netherlands, Sweden, Poland, South Africa, Austria and France - all others total just 56 entries.

Digging a little deeper, the Top 10 UK counties, and the % of the UK only entries are:

Australian States, and the % of Australian entries only are:

The above figures include some multiple entries from individual members, but they are indicative of the overall countries of interest of the members who have submitted their interests to the Members Interests table, which is open to all members.

There are 240 WAGS members (apx. 12.5% of the membership), and 36 Affiliated Society members represented in the above numbers.

A recent Poll on the WAGS website (March 2012) looked at getting an idea of peoples Australian (only) interests, and is available here: Australian research interests poll

The numbers are similar to the above members interests %'s, but include some entries from non-members, so it is a slightly different demographic.

As you can see, the research undertaken by our members is not just Western Australian, in fact WA research interests is only 8.70% of the total.

There is a wealth of expertise available within the existing membership for new members who need a hand in any areas of research, whether it be Western Australia, other Australian States, the United Kingdom, Ireland, Europe, India or anywhere else you may need assistance.

You can really read "any local society" in place of the Western Australian Genealogical Society.