Group 68 on the Peel Estate

Governments often have good ideas. The problem seems to be making them work….

In 1921, with so many of its young men lost to the Great War, Western Australia was in desperate need of new settlers. The Government of the day offered free land and assisted passage to British families who were willing to develop farms in the State’s South West.

Settlers were to work in groups of 20 developing the land and later each would take over a farm when it was fully prepared. Groups were established in the Manjimup district, followed by others at Denmark, Northcliffe, etc. as well as on the Peel Harvey Estuary south of the State’s capital, Perth.

6,000 families, keen to leave the austerity of post war Europe applied to be part of the scheme, but many soon became disillusioned. Most of the land was heavily forested and had to be cleared by hand. Living conditions were incredibly harsh.

Ultimately the scheme ran into trouble and by 1925 was the subject of a Royal Commission. It was a social and financial tragedy, another good idea which went horribly wrong.

In 2010, two photographs were donated to the WAGS Library by the family of the late Filson Beckett.

The images showed men and children of Group 68 on the Peel Estate in 1924.  The listing of members of this group in the WA Post Office Directory for the years 1924 (image right) and 1925 include Frank Beckett, farmer, and he was surely the reason for Filson’s interest in the photographs.

Most of the men and children in the photographs are named, and WAGS is making the images and the details that accompanied them available, in the hope that they will help the descendants of these families tell the story of their forebear’s experiences on Group 68.  We are confident this is what Filson would have wanted.

•    Information about WA Group Settlement records can be found in Dead Reckoning on the website of the State Library of WA. 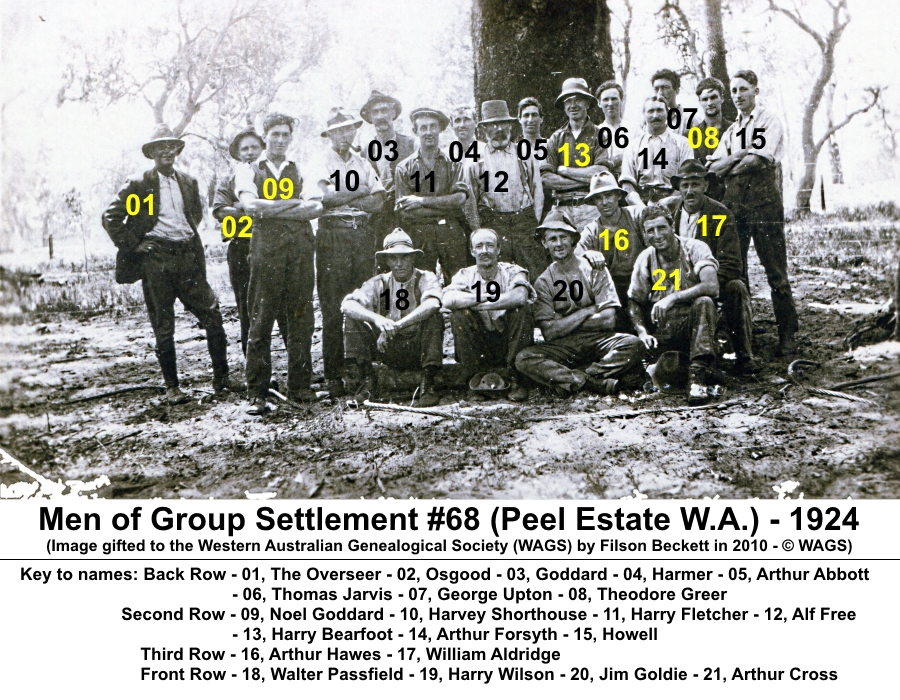 NB - Harry Woolger, James Black, W. McCormack (and possibly also Frank Beckett) are missing from the photograph but were still on the group in 1924

NB - Mrs Hawes, and her daughters Violet and Queenie Hawes have been recently identified by a descendant.

Identifying numbers have been added to the above photos.

To the best of our knowledge the people named above refer to the people in the image position/s shown.

If you can confirm the names of any of these people, and / or correctly identify their position in the photos please contact us via email with the details at:

This email address is being protected from spambots. You need JavaScript enabled to view it. (<< click to send email)