A Place in History - Ada Bodart

During 2015 Britain is commemorating the life and death of Nurse Edith Cavell. Nurse Cavell was executed by the Germans in Brussels in October 1915 for her part in helping allied soldiers to escape back to Britain.

One of the other 35 people tried with Cavell was Ada Bodart who is virtually forgotten.

For her heroic part in aiding the soldiers to escape from German occupied Belgium she was condemned to death with Cavell and seven others.

The severity of the sentence was a shock, especially as the case did not involve espionage, a crime more commonly associated with the death penalty. Because of this the Judges who presided over the case subsequently reduced Ada Bodart's sentence to 15 years hard labour. She went on to receive an O.B.E. (Order of the British Empire) in 1919, played herself in the silent movie Dawn in 1927 and was the "godmother" of the Old Contemptibles Association, yet all of this is rarely acknowledged.

So why has Ada been forgotten?

Perhaps it is because that at the time she fabricated many elements about her past that has not yet been unravelled. The one consistent fact conveyed in the newspapers is that her maiden name was Doherty.Most of what is believed to be true derives from her account of her early life published in The Sunday Post between the 22nd of April and the 27th of May, 1923. These articles also cover the amazing story of the network that helped the soldiers escape.In the article she claims the following;

She was born in Edinburgh in 1881 where her father was a lieutenant in the Garrison Artillery. The family left Edinburgh when she was about three years old.Her father, who is not named in the article, was born in Scotland of Irish stock. His brother, Robert Haig Doherty, was the town clerk at Newry in the county of Down, Ireland and he knew his brother was anxious to quit the army. When a position in the Inland Revenue became vacant Robert used his influence to ensure his brother received the position at Warrenpoint.

Her mother, Elizabeth Kelly, was born in Liverpool and she initially refused to move to Ireland. Ada and her mother would live in Richmond, Yorkshire while her father went to Newry to work. However, when Elizabeth went to visit her husband she decided it was a delightful place and that she would make it her permanent home. Ada, now aged five, would be sent to boarding school at the French Convent of the Assumption in the Everlasting Road, Richmond, upon her father having received assurances that his daughter could attend a Protestant place of worship.Her mother died one or two years later and her father decided that Ada would be better off under the influence of the convent than with his Irish housekeeper. She was at Richmond until she was nearly eighteen, her father making occasional visits to see her. Ada wanted to learn languages and the nuns suggested that she offer her services as a teacher of English at a convent in Europe. She applied to the Convent de la Providence at Metz and received a reply that, in exchange for teaching English, she would receive board and lodgings with lessons in painting, French and German.
Her father approved of the move and accompanied her to Metz. However, he never saw her father again.

Ada soon found that life in the Metz convent was too strict and boring so she began applying for positions advertised in the newspapers. She didn't have the necessary references so, according to her story, she took an audacious step and wrote to the British Minister in Brussels, Sir Francis Plunckett, to ask his help in getting a position as he was supposedly a family friend. Sir Francis managed to find her a position with Baron Capelle who resided in Brussels and had a summer chateau at St Denis-Bovesse, near Namur. She wrote and told her father of her good fortune. He was furious and demanded that she return to the convent at Metz or Newry. He threatened that unless she did so he would never communicate with her again.

When the Capelle family was at their summer house she met a young Belgian at the house of a girlfriend in St Denis-Bovesse. He was Philip Bodart, an engineer from the village, and he urged her to meet him secretly. He showered her with gifts and told her that he wanted to marry her. She then told her mistress responded by telling her to dismiss all thoughts of marriage from her mind. She pointed out that my lover was out of my station in life, that without my father's consent there could be nothing but trouble, and that if I waited I might even make a better and a richer marriage.However, Philip' s devoted pursuit won the day and they married at the town hall in Brussels. She wrote to her father with the news of her marriage but he never replied. After the war she wrote to a clergyman in Newry who told her that her father had died during the war and that her two brothers, Austin and Joseph, had been killed in action.

Philip Bodart set up business as an engineer in Brussels. They were extremely happy and had two children together, Phillip and Hilda, before her husband died in 1909. He left her in good circumstances in a comfortable house in Rue D'mile Wittmann.

It is unclear whether the reporter simply misinterpreted or included all the "facts" he deemed necessary to be taken into consideration for his story. However, her early life is rather different from the one appearing in the article.

Ada was born Anna Maria Doherty on the 22nd of July, 1874 at Newry, Down (not Edinburgh). She was the 8th of eleven children born to Richard James Doherty and Elizabeth Kelly, and she was known to the family as Annie.Richard and Elizabeth were married on the 2nd of August, 1860 at Warrenpoint. They were Roman Catholic, not Protestant, and Richard was a member of the Newry Confraternity of the Holy Family. According to the newspaper Richard worked for a shipping agency, the Dundalk and Newry Steam Packet Company, for many years and in 1876 he was appointed their agent in Ardrossan, Scotland. A son was born at Ardrossan in 1878 and the family moved back to Warrenpoint by 1880 when the last child was born. Richard was a clerk in the Navigation Office in Warrenpoint at the time of his death in 1904, not during the war as previously stated. His brother Robert Hogg (not Haig) Doherty was the town clerk and a leading figure in Newry.Ada began working for Baron Capelle in 1898 looking after the children. How or when she arrived in Brussels has not yet been established.

On the 26th of November 1898 she married 36 year old widower Louis Joseph (not Phillip) Bodart in Brussels, she was 24. The marriage certificate confirms that Ada was born Anna Maria Doherty in Newry in 1874. The certificate also confirms that her parents were Richard James and Elizabeth Doherty and her Brussels address was that of the Capelle family. Her father's occupation; however, had been upgraded to "avocat" or lawyer.Louis Joseph Bodart was born in Taviers, Belgium. He lived in Namur and was a "cocher" or coachman, not an engineer. Ada was pregnant when they married and her son Philippe was born on the 3rd of April, 1899 in Brussels. Her daughter, Hilda, was born on the 16th of December, 1900 and Louis died on the 10th of August, 1909 in Brussels. A memorial card indicates that she was still known as Annie when Louis died.

However, records indicate that she was born in 1874. Based on this information there are about six years unaccounted for before she arrived in Belgium. It is highly unlikely that her family knew Sir Francis Plunckett or that he helped her find employment. One possibility to finding the position with the Capelle family is through the Queen Victoria Institute for Governesses and Nurses, a British charitable fund operating in Brussels in 1815. It still doesn't explain how or when Ada came to be in Belgium.

Ada seems to be estranged from her father and family. She took her children to visit her siblings in Dublin in 1923. From later newspaper accounts of this visit it seems that her younger sister knew little about Ada. She also went to Rostrevor, a place about 4km from Warrenpoint, to visit relations. There is a convent near Warrenpoint and Ada probably received her education there. She didn't have a brother called Austin and four of her brothers had Joseph as a second name. No evidence has been found of any brothers being killed in action; in fact most of them were too old to be in the army and some died before the war.

Condemned to death with Edith Cavell and spared execution through the intervention of Marquis of Villalobar, the Spanish Minister, she spent three years in a German prison before being released at the end of the war.

The British Government awarded Ada an O.B.E in recognition for special services rendered during the war. The Belgian and French Governments also awarded her medals for her services. In 1919 Ada requested that she receive 4,425 francs in compensation from the British Government for assistance given to soldiers escaping to Holland. She was virtually destitute and an advance of 1,000 francs was given before being awarded the entire amount.

Her son Philippe became a "technicien" and possibly died in the 1950's. Her daughter Hilda married Robert Recour, an "industriel", in Brussels.

1928 Movie poster for "Dawn"
in which Ada Bodart played herself 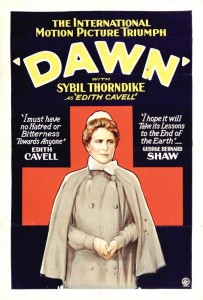 Ada appeared in the silent movie Dawn in 1927, playing herself in the movie. The refusal of the British Secretary of the State for Foreign Affairs, Sir Austen Chamberlain, to see the movie and the controversy he created because of his actions saw her return the O.B.E. in protest in 1928.

Ada passed away after a short illness on the 6th of February 1936, aged 61. A funeral service was held on the 10th of February at the Cathedral of St. Michael and St. Gudula in Brussels. 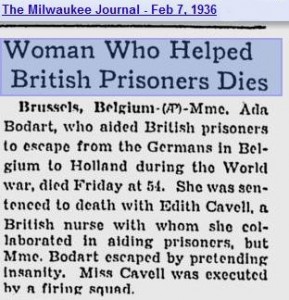 It doesn't really matter why Ada romanticised her early life, why she called herself Ada, why she was estranged from her family or where she was before she arrived in Brussels. Perhaps it was her creative ability that kept her alive during the war.

Ada Bodart's story is fascinating and her bravery and ingenuity in helping allied soldiers return to Britain should be recognised as much as the part played by Edith Cavell.

Ada Bodart also had a connection with Western Australia -  Details in Part 2...

Almanacs of Trade and Industry [Brussels]

Black, David, Biographical register of members of the Parliament of Western Australia, Perth, 2001

Sturgess, H.A.C, Register of Admissions to the Honourable Society of the Middle Temple (from the Fifteenth Century to 1944) Butterworth & Co., 1949. Three volumes.

Vital and other records from Ancestry.com, findmypast.com, FamilySearch.com, ancestryireland.com