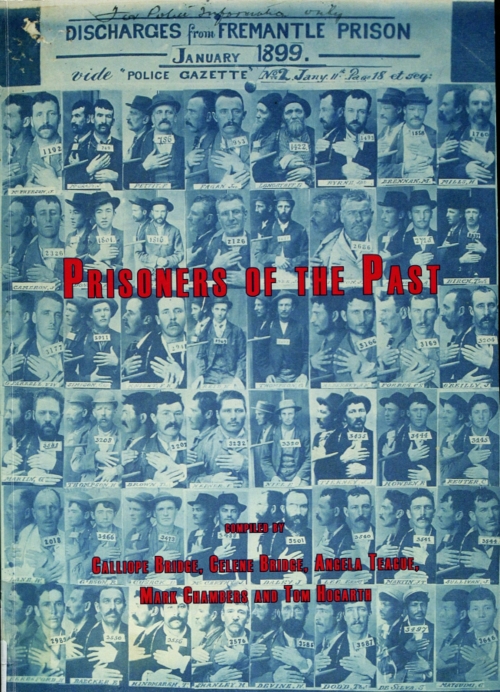 I was hasty in my assumption, nevertheless the publisher’s one line description of the work ‘all the mugshots of prisoners released from Fremantle Gaol from 1899 to 1919, over 3850 and full indexed’ wasn't exactly clear. Neither was the remainder of his blurb, it being a somewhat convoluted analysis of the backgrounds of those incarcerated in Fremantle Prison during that time.

Unfortunately, the introduction to the book is also somewhat convoluted and it was necessary to ask for assistance from staff at the SROWA to interpret its content.

It appears that a researcher who was systematically examining the WA Police Occurrence Books in the SROWA on an unrelated matter, came across some loose photo sheets in an occurrence book created by staff at the Beaconsfield Police Station.

I suspect these ‘photo sheets’, headed Discharges from Fremantle Prison, were reproduced from the original mugshot photographs and that staff at the Beaconsfield Police Station kept the sheets handy in the back of their Occurrence Book as a reminder of those prisoners now back in the community who might become ‘active’ again.  As far as I can determine, these photo sheets are not included in the set of Police Gazettes held by the SLWA. However clearly printed above most of the sheets is the statement – For police information only  and this would explain why. Having served their time, these ex- prisoners deserved to have their anonymity preserved and not have their images generally available.

The publication Prisoners of the Past covers the period January 1899 - December 1919, although there is a single entry from March 1898 concerning a John Armstrong (Reg. #2602) who absconded from a Fremantle Prison work party.  I had to smile at the three choices used to describe the build of each person, namely ‘slight’, ‘middling stout’ and ‘stout’.  John was middling stout!

Most pages in the book contain approximately twenty four ‘mugshots’ with the name of each ex-prisoner (spelt exactly as recorded) and his/her prison registration # underneath. Users are wisely advised to consider possible surname variants.  The introduction indicates that the sheets of images were digitally sharpened and in some cases split into two and enlarged for easier viewing which is very helpful.

Further information about these ex-prisoners can be found in the corresponding volume of the WA Police Gazette under the heading ‘Return of prisoners to be discharged from Fremantle Prison.

indicates that he was middling stout, 28 years old, 5’3” tall, with black hair, dark brown eyes, full visage and a copper complexion. He was a butler by trade and a native of Ceylon with scars on his left thumb and on his nose. He had served four months in gaol.

There are 3,850 mugshots in Prisoners of the Past arranged in chronological order by the issue date of the ‘Discharge’ photo sheets and also included is an alphabetical index of surnames compiled by Angela Teague.

In a nutshell, if someone from your family tree is here, you’ve made a great find. This publication is very useful, especially for historians and genealogists

The provenance of the Discharge Sheets, which is not mentioned in this publication is important and again I’m grateful to SROWA staff for the following information:

Prisoners of the Past is essentially a reproduction of a Discharge Register kept by the Beaconsfield Police Station:   https://archive.sro.wa.gov.au/index.php/discharged-prisoners-26.

A further register of 'mugshots' from the Police Gazette, kept by the Beaconsfield Police Station, which is not referred to or included in Prisoners of the Past can be found: https://archive.sro.wa.gov.au/index.php/photographs-s3281

Additional images held by the SROWA relating to prisoners / those charged comprise:

WAGS Library & Resource Centre has purchased a copy of Prisoners of the Past and it’s now available for viewing or borrowing on the Library shelves  at 994.11FRE.  It's well worth a look.